Poe passed away today from complications related to ovarian cancer, a cancer common in laying hens who have been bred to be heavy layers, but Poe was much more than a good layer of beautiful light-green eggs; she was a highly intelligent, proud chicken who marched to the beat of her own drum; she was an independent thinker; she was a helper in the garden; she was a care taker for all misfit chickens on Sands End farm; and she was a good friend to our family.

Poe came to live with us via the United States Postal Service. She came to our family early in 2016 as a “surprise” chicken in an order of Ranger chickens. She was a little black fuzzball in a sea of brown and cream, so she was special from the first day we met her. 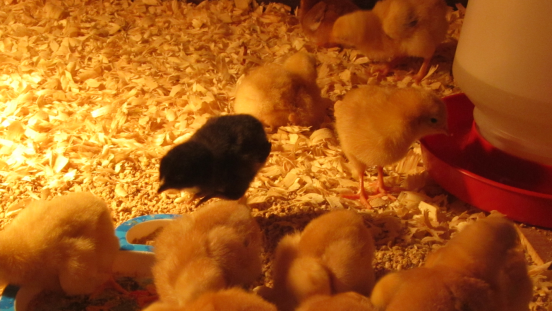 For many months after she arrived, Poe’s breed was unknown, but she stood out as an unusual hen early on. When other chickens came along who needed someone with them, as chickens shouldn’t be raised alone, Poe was our go-to hen for babysitting new babies or anyone who was injured and had to be temporarily separated from the coop. In fact, Poe helped raise our Welsummer rooster, Rooster, who just so happens to be awesome as well. In the moments of Poe’s death, Rooster crowed and crowed, loudly and sorrowfully, though he could not see her.

Poe came to be known for her quest for flight. She could fly higher and longer than any other chickens on the farm, and, as such, she came and went as she pleased for most of her life. Poe could be found in the garden helping dad by eating the grubs, in the backyard scoping out grubs and bugs, or in the duck area, eating the ducks’ food while they quacked and complained. Sometimes, Poe would fly out of her very large chicken yard, just to visit and hang out–or ask for some grapes, her favorite food. Poe would never say no to a grape, even in the end. Interestingly, even though Poe could have, she never left our farm. She seemed too intelligent to leave the safety of her home. 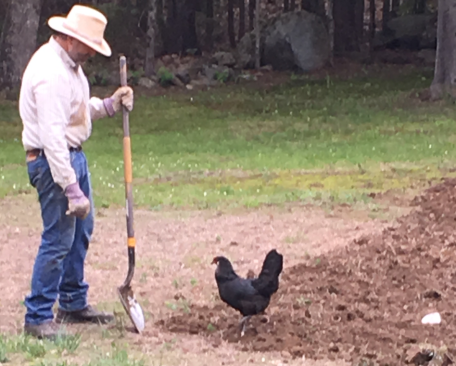 In the last year of her life, as flying became more difficult, I would let her out of the chicken area in the morning, so she could have her alone time. Poe would fly back to the chicken area when she was ready. But Poe was always a bit different and a bit of a loner in the flock.

Poe’s major accomplishments included eating almost the entire row of broccoli plants in our garden in 2018, being the mother of four baby boys, who have turned out to be good roosters, and having a poem written about her, which was published in 2017. It is the best poem in the history of chicken poems, and I would argue one of the best children’s poems ever written. It captured the spirit of our Poe, and what a monumental task that was! 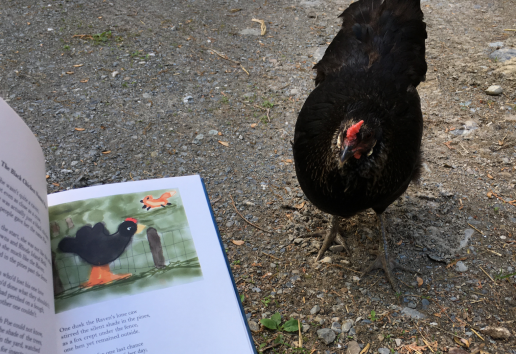 In the last week of her life, Poe decided she didn’t want to be alone. She moved into the garage where she decided to be a squatter in the crate with our broody hen, Nugget, who didn’t seem to mind having a roommate while she sat on her eggs. When the babies hatched, Poe came to live in the house permanently.

In the last few days of her life, Poe fought valiantly to live, having some good days and bad days but, overall, doing all that was in her power to live longer. Three days before she died, she ate and drank almost normally and got to spend some time in the garden. But she could walk just a little, scratch just a little, and tired quickly. Still, that night, as she was being put to bed, she held her beautiful tail up straight and proud, something she had not been able to do in quite some time. For a moment, I had some hope that Poe may recover, but it was not meant to be. Despite her powerful will to live, her little body was sick and very tired. 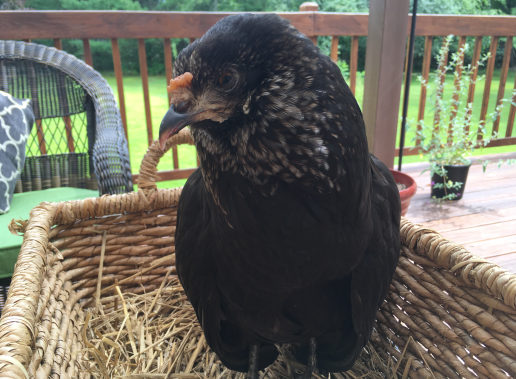 Poe passed away this morning, July 21, in my arms, showered in my tears, and surrounded by our family, who also shed many tears for such a special chicken. In the end, she knew she was deeply loved.

Poe will be forever remembered for making only rooster babies (not one single baby girl), for her flying, for inspiring poetry, and for teaching this human just how very intelligent chickens are. In my years of keeping chickens, I have met many intelligent birds, and they all have their own ways of being intelligent. But there was something special about Poe with her curiosity that seemed, to this human, to be so very human like. We were able to connect with one another. She was like my familiar, and I loved her. 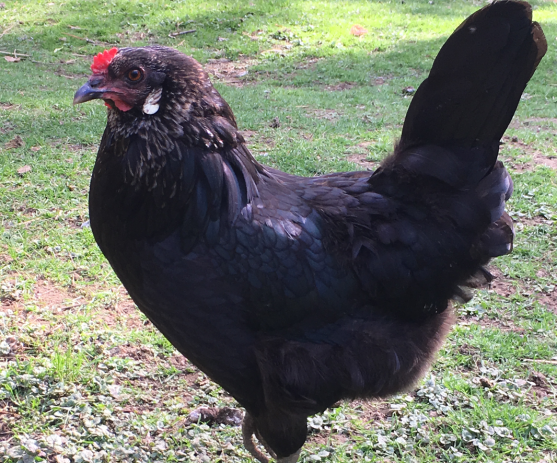 Poe will always be remembered by me as the one who taught me more than, perhaps, I wanted to know. Poe changed things, and I will never be the same. Poe was also, then, a great teacher.

Poe will be laid to rest with a stone marker on the Sands End farm. A small service will be held in her honor, and poetry will be read for her.

In lieu of flowers and donations, to honor Poe, please buy humanely-raised eggs. “Cage free” means nothing, so please look for the humanely-raised label on your eggs. Better yet, if possible, buy your eggs from a local farmer. You will pay a little more, for sure, but chickens are beautiful, intelligent, complex little beings and deserve good lives while they are here. Poe would want you to know that.

She wasn’t quite just a chicken,

and maybe more than a crow,

but it’s said she’s been seen with a raven,

~from “The Black Chicken Named Poe”

in Why the Moon Tumbled Out of Sky