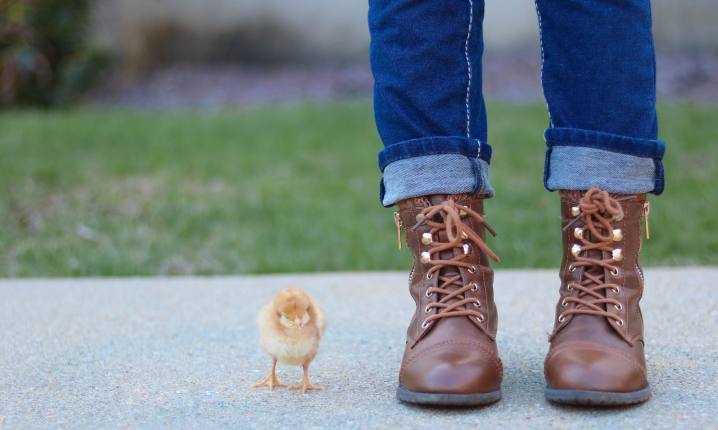 Even if you’re not a chicken person, you’ve probably heard about the rise in salmonella outbreaks in the United States in the last few years. This rise in the number of salmonella cases directly corresponds with the rise in the number of people keeping chickens. But every time this issue comes up–and it does keep coming up–many backyard chicken owners dismiss the CDC reports as conspiracy.

I’ve written about the rise in salmonella cases myself and wondered about my own chicken-keeping practices. When I first wrote that I would have to stop kissing my chickens and shared my post in chicken communities, some readers were downright angry with me. “It’s all a conspiracy” was the gist of the comments.

I have to admit that it’s hard to know what’s real and true about anything these days, and there’s a lot of misinformation out there about chickens. I can spend weeks researching something about my chickens, only to get conflicting answers from all the experts I can find. Plus, I totally understand the urge to have at least a little mistrust of government agencies who have very strong ties to agribusiness.

But I don’t think that’s the end of this story.

In the middle of all of those posts in the chicken forums about how all of this salmonella talk is just a lot of hype, I also read a few stories from chicken owners who had contracted salmonella from their chickens. It’s not fun. The women telling their stories were very, very sick.

But where does that leave us?

I always find myself somewhere in the middle on most issues and this one seems to be no different–and this is after researching this issue quite a bit for about a year. In 2016, I first read about the CDC report linking the rise in salmonella cases to the rise in backyard chicken keeping. Since then, as more people continue to get backyard flocks, the issue comes up again and again.

Most recently, NBC news reported on the rise in salmonella in the U.S. According to the numbers, the cases of salmonella continue to rise, and in 2017, we’ve already had more cases than we had in 2016 total. We’ve had 961 reported cases so far in 2017. But these numbers do seem kind of low to me considering how many people in the U.S. keep chickens. I can’t find any definite numbers on the number of people who keep chickens, but it must be hundreds and hundreds of thousands. One chicken forum on Facebook alone has about 100,000 members.

Still, I can’t help but think it would be terrible to get sick from my chickens, and for the people who have gotten sick, I’m sure it is terrible.

This summer, we had to keep a baby chicken in the house for two weeks to keep it alive, and while I wouldn’t change a thing and am so glad I did it for that little sweetheart, I understand that I was taking a risk. For those two weeks that my baby chick, Buttermilk, was in the house, I was worried and super careful. Was I careful enough? Well, I didn’t get sick. Did I just get lucky? Maybe.

But I think the thing we can all agree on, whether we think all of the salmonella reporting is just a bunch of hype or a serious issue to be addressed, is that some good common sense when it comes to keeping chickens is always a good idea. Here are some key takeaways from both the reports and from people who have kept chickens for years:

Really, anytime you’ve had contact with your chickens, it’s good to wash up. It’s a good habit to get into, though it can be tough to get kids into this habit. I know our little boy often forgets. I can see why young children have the highest risk of contracting salmonella.

2. Use different shoes for visiting your chickens.

This is something we really have to work on in our house. Thankfully, we don’t have babies crawling around on the floor anymore, but, if we did, this would be a bigger issue for us. We really should wear different shoes out to visit the chickens.

3. Be aware that keeping chickens in your house is going to make things tougher.

Of course, the CDC says to never keep a chicken in your house, but people do it. Plus, even though I’m not a house chicken kind of chicken lady, I ended up having to keep a chicken in our house because the baby was sick and needed care. But it’s a risk. I think we have to know that.

4. Finally, don’t kiss your chickens–if you can help it.

I always forget about this one, and I realize that I’m never going to stop snuggling my chickens as the CDC recommends. But, if I forget and kiss a chicken, I clean up. And, after I snuggle a chicken, I never wear those same clothes to cook meals in.

I honestly think it’s ridiculous to expect people not to snuggle their chickens, but I also think that maybe there are some good points behind all the hype. I’m going to try to be more careful, just in case.

But I’ve also had a chicken give me a hug, so I’m always going to keep chickens.

One thought on “On Chickens and Salmonella: Are the CDC Warnings Real or Hype?”