You may have seen the images of the chicken shaming that have been going around social media in the past few weeks, and I hope they made you smile as much as they made me smile. The one about the chicken who ate the mouse whole really made me giggle. I haven’t seen my girls do anything like that, but I have seen them take down some pretty large and pretty gross things, mainly fat grubs.

The images got me to thinking about my own girls’ behavior and how hilarious our chickens are. They make me laugh all the time, though they can also be a real pain sometimes, and those chicken shaming images made me want to share with the world how wonderful, awful, funny, and wild our chickie girls are.

Now, let me tell you, shaming your chickens is not as easy as it seems. I don’t know about other people’s chickens, but my girls are pretty tame. Yet the first time I tried to hang a sign on one’s neck, I felt like the worst chicken mama in the world! My poor sweet girl was so scared and seemed convinced the sign was going to be the death of her. Needless to say, this broke my heart and made me realize that I was going to have to find an easier way to shame my chickens and share their cuteness with the world.

I could only manage a few, as word spread quickly amongst the girls that mama was up to no good, so I could only put the signs I made near the “guilty” chickens in question. It worked pretty well overall, but I have many more stories to tell, like how the chickens have completely dug up our yard or how they moan and groan and squawk and cry to the high heavens until they are let out to free range each day.

But I’ve captured some of what it’s like to live with chickens, I think. I love these stinkers! 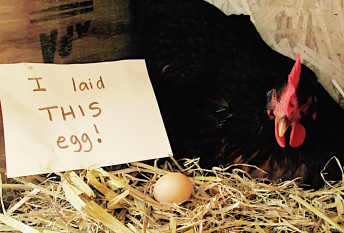 I don’t even know how this happens, but, a couple of times, one of the girls will lay a mini egg. It’s adorable but not worth much. There’s no yolk–at least there wasn’t a yolk in the first one we found. But, of course, I’m fine with a tiny egg every now and then. It’s just too funny that this happens.

This next one is Guineveve, and she’s one of our newer babies. She’s an ISA Brown, and we found out that this breed originated in France. Unlike our 17 Rhode Island Reds, each of the ISA Browns looks a little differently than the next one, so we’ve been able to name these girls.

Guinevieve is the most beautiful to me, but she’s also the most aloof. She lets us pet her, but she doesn’t come running to us like the other girls. And, most worrisome, she doesn’t seem to like hanging out with her sisters very much. She even roosts by herself at night.

Well, this week, we thought we’d lost her, our first loss. If you read my original post on counting chickens, you know how much I worry about losing one of our girls. Guinevieve seemed to be our first casualty this week.

It was time to put the little girls up for the night, and my husband said he could only find 7 of 8 baby girls. The girls are sleeping in the garage right now, so I was sure our chicken was somewhere in there. But, when I went outside and looked at the baby girls, I realized the missing girl was Guineveve! Considering her loner behavior, I thought maybe she was really gone.

I thought surely she had flown out of the open garage door and had been chased into the woods by one of the bigger chickens, only to be eaten by a fox, hawk, bobcat, or some monstrous, chicken-eating creature in our woods. It was getting late, and we looked for an hour with flashlights, calling for her. I was crying, and my husband seemed to feel so badly. I was trying so hard to tell myself that I had to deal with this kind of thing, that this kind of thing has happened to our neighbors times 10, times 20! I had to be tough.

I kept going back and looking in the garage, just to be safe, but still, just 7 of 8 little girls. But, then, after a little more hunting, my husband said, “I wonder if she’s still in the garage somehow,” and it dawned on me–I had not looked up really high. I just assumed she could not get up to the rafters in our garage.

Guess what! That’s where she was! When I opened the garage door, looked up, and saw her little white tail feathers, I was happy, relieved, and bemused that this little stinker had caused such a commotion. So we still have Guinevieve, but she’s getting shamed this week!

And, though I love our chickie girls more than I can say, I have to admit that the girls can often be stinkers–even a little mean. I have to stay on them and “be the rooster” sometimes, but, when they can, some of them will be little bullies. This spring, several of them have taken to bullying the poor little squirrels in order to take the seeds from the squirrels we feed. Or, perhaps, they do it out of spite because I see how enviously the chickens look at the squirrels when the squirrels are running free in the mornings while the chickens are still waiting to get out of their pen. I’m pretty sure those squirrels are getting the evil chicken eye.

So, this week, my mean girls get shamed as well!

Finally, after spending this morning “chicken shaming” and scaring some of my girls half to death with my little signs, my husband said that I should be shamed myself. I think he’s right. Our little chickie girls are sweet and beautiful and, sometimes, downright ornery, but I never want to make them feel badly. So my final sign is for me.

And, since I wasn’t able to tell all of my girls’ ornery stories via pictures, I’ll just have to tell more stories in the weeks to come. If there’s one thing I’ve learned from raising chickens, it’s that those girls are always up to something and always completely entertaining!

One thought on “On Chicken Shaming”