It all started, really, with the loss of my Poe. She was a black Easter Egger who had my whole heart. About a month after Poe died, we had our first hawk attack in the whole six years we have been raising chickens. And I came upon it right in the middle of the attack.

It was my worst nightmare as a chicken keeper. One of my original hens, one of my precious Rhode Island Reds, was being eaten alive. I scared away the hawk and scooped up my girl. She wrapped her little feet around me so tightly and leaned into my chest. I will never forget how I could sense the relief in her, the relief that mama had saved her.

When she spit up blood, and we got a good look at her wounds, I realized mama hadn’t really saved her at all.

The second hawk attack was less grim for me because my girl was already dead, but I was still devastated. Honestly, I felt like I couldn’t take any more and was struggling to decide if I could continue to be a chicken farmer.

We have a large fenced area (about ¾ of an acre) for our chickens, complete with lots of trees and many places to duck and cover. In all of our years of keeping chickens, we didn’t have a single hawk attack. When we had two back to back, I started to research heavily. I knew confining everyone to the run was the quickest solution. I read that due to lower than normal numbers of birds in our area, hawk attacks were on the rise. Things were going to change for us, in terms of how we had been raising our chickens.

But I had read in some folklore (and while I am an academic and science lover in my mind, I am a folklorist at heart) that black chickens, which look like crows, can help keep hawks away.

It made sense in my heart-broken desperation, of course. With Poe, we had no hawk attacks. Without Poe, hawk attacks.

So I went online and found a local chicken girl with black Easter Eggers. I was a little worried that the hens, though beautiful, seemed lethargic. We kept them in quarantine for a few days. I was mainly worried about mites. I saw no signs of anything and put them with the flock. I knew I was breaking the 30-day rule, but I had never been able to follow the 30-day rule. We just didn’t have a second coop. I had been lucky so far.

This time, I would not be so lucky.

Within a few days, everyone in the flock was acting kind of strange. That’s the only way I can describe it. I remember closing them up one night and realizing they didn’t talk back to me when I told them goodnight. I was scared about what might be going on. Within a week, my first hens were coming down with respiratory issues, and these issues were pretty epic. If I thought the hawk attacks had been my worst nightmare as a chicken owner, I think the realization that my entire flock had been exposed to a serious respiratory issue ran a close second. It was devastating, and it was my fault.

I am terrible at making a long story short, but I need to. I want to help inform others about what I went through and what worked as treatment—and what didn’t work.

I contacted my vet, and we were not able to test for Coryza, but my flock experienced almost all of the symptoms. Because we are not sure if we had Coryza, we have decided to play it safe and keep our flock closed for the rest of ever. It’s tough. I raise good roosters, but I would never want to risk someone else going through what I went through.

The main symptoms were rales, runny nose, sneezing, and swelling around the eyes and face on some birds. Some also experienced gunky eyes. The only symptom of Coryza we did not experience was the smelly, runny poop. However, I have read that respiratory illnesses can be pretty severe and still not be Coryza, so there is a chance we just had a really bad respiratory illness. Still, I proceeded as if I was treating Coryza.

The rales were the worst, I think. We started out isolating birds who showed signs in our garage, and the rales were so loud some nights I could hear them in the house. It was like some kind of Edgar Allan Poe story where I was being constantly reminded of my sin of bringing in the sick birds, who just so happened to be black. You can’t make this stuff up.

I spent months treating what would eventually turn out to be every single member of our flock. Morning and night, I would do rounds of treatments on my sickest patients. Some were highly cooperative; some were not. Of course, they were grumpy at being so sick. I was bitten and scratched, and, of course, I deserved it all, I thought. I work full time and also homeschool my kiddo, so being a nurse to 30 chickens took a toll for sure. I felt so worn.

But I think the worst night ever was when one of original hens and favorite birds was at her worst. I had been to the vet and had antibiotics, but she had grown very sick very quickly. She’s my oldest hen and my sweetest girl. Her face was so swollen. Both eyes were swollen shut and were bulging. I didn’t know if the antibiotic would work quickly enough, and I found myself researching again, this time the most humane way to kill a chicken, if I had to do it. She lived in our bathroom for over a week and recovered fully, but I remember the dread I had each time I had to treat her because I was terrified of hurting her or making things worse. As an empath, I am a terrible, terrible nurse, but I have found that being a chicken farmer does force me to find strength I didn’t know I had.

In the end, I was treating someone from November 1 to the end of January. Finally, finally, we are down to maybe a sneeze every now and then. The hens are laying and are able to get outside some now. We are now able to stay in prevent mode, which is just a wonderful relief. 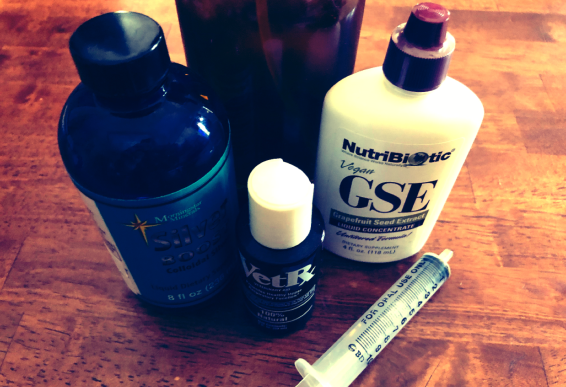 Below, you will find a list of symptoms and treatments I used. I am just completely honest here about what worked and didn’t work for me. Others may have different experiences, of course, but I wanted to share what I did, as we did not lose a single hen. I read everywhere that the best thing to do is to cull. I am so glad I didn’t. Everyone made it through, not a single death, (and I have some old hens) and I learned a lot.

Rales (loud noises with every breath)

I think the moral to this story is to not give up hope, even if your entire flock gets really sick. I have some really old hens who took a long time to get well. Both of my hens who had the antibiotics were older and relapsed pretty hard. They were both sick for nearly two and a half months! But you would never know it now. They are running around, busying-bodying more than ever.

If you have tried and succeeded with other treatments, please share your experiences in the comments!

*Please note I was not paid to promote any of these treatments. I simply research treatments others had tried and tried them myself. My opinions are based only on my experiences treating my chickens.